This tutorial will use both the LCD and IMU modules on the Chitu development board to implement the reading and display of IMU data, as well as the simulation of the broken screen effect.

The development process will be explained in 3 parts as follows

An introduction of IMU module and its driver API

On the Chitu development board there is an Inertia Measurement Unit (IMU), model MPU6050, a small black square located between the LCD display and the TF card, and is connected to the processor via the IIC bus.

WCH and MRS IDE provide the API of IIC bus, so it is feasible to directly use the interface provided in ch32v30x_i2c.h for development. For the sake of simplicity and convenience of development and application, Chitu also provides a packaged API for the MPU6050 sensor, and the relevant functions are stored in IIC.h, IIC.c, MPU6050.h and MPU6050.c. To use them, you only need to #include "MPU6050.h" and then make modifications according to your requirements.
The following is a brief introduction to the functions and usage of related functions.

The first step is to initiate the IMU, in which the IIC bus is initialised and a series of initialisation instructions are sent to MPU6050, and the operating status is checked at the end.

These four functions are for reading and writing to the MPU6050 bus and are all called by other functions in the API. They are not normally used by external code, but if you want to add more functionality, then these functions will come in handy.

These last three functions are used to obtain the sensor temperature, the tri-axial angular velocity, and the tri-axial acceleration. The output data is raw, unprocessed data in the range -32768 to +32767 and needs to be converted according to the previously set FSR. The conversion process can be carried out separately in external code or integrated into the API and modified as required. The default X-axis square is the right side of the board, the Y-axis positive direction is the upper side of the board and the Z-axis positive direction is the back side of the board, which is a left-handed system rather than the usual right-handed system.

The MPU6050 is a powerful six-axis inertial sensor and has many uses to be exploited, so if you are interested you can refer to the MPU6050 user manual to further expand the function of the API.

The use of the LCD module has been briefly introduced in the previous article Running Snake on WCH Chitu RISC-V MCU, but the LCD driver API used in it is rather basic and can hardly meet our needs for screen shattering simulation, so this part of the tutorial will make some modifications on the basis of the original API to achieve a better display. 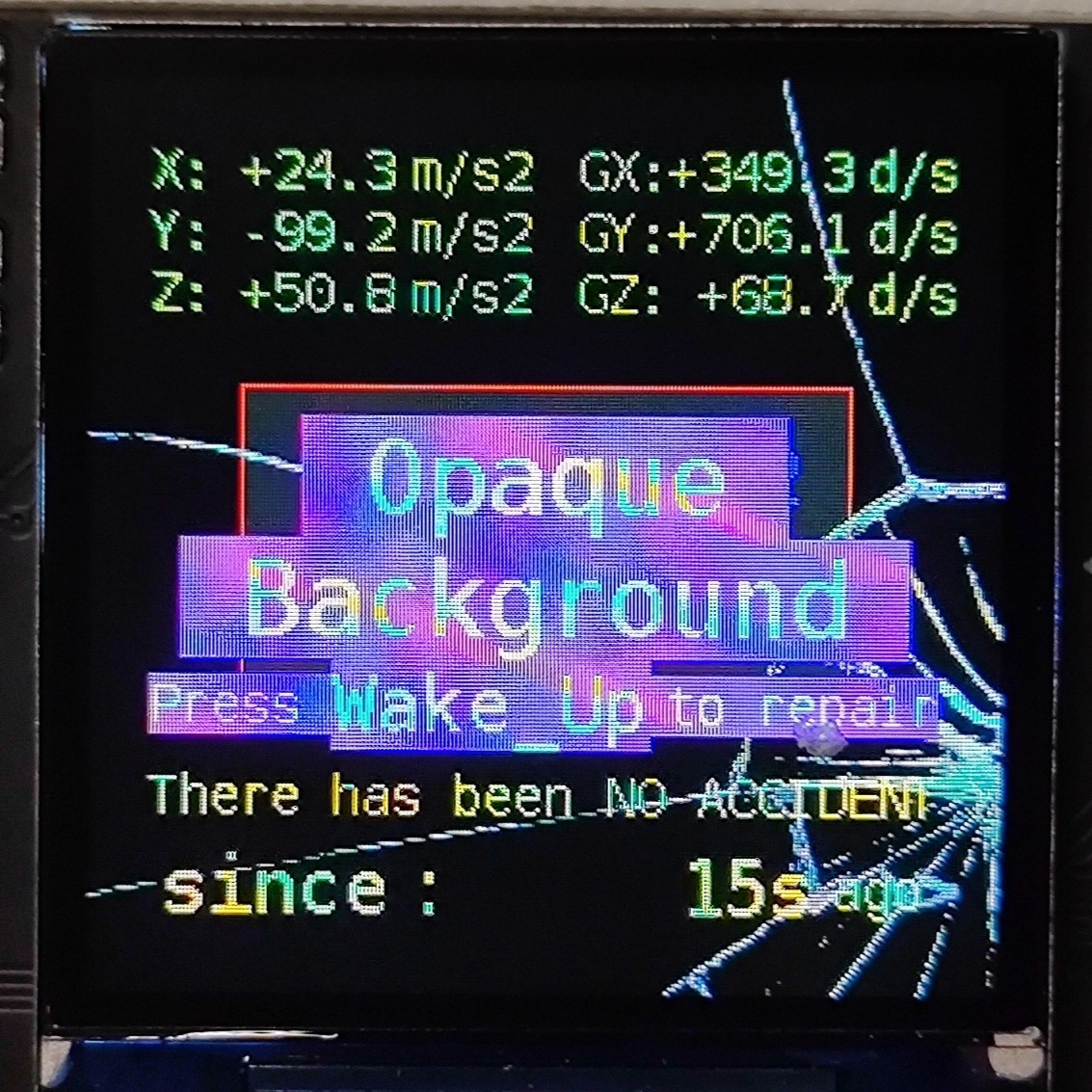 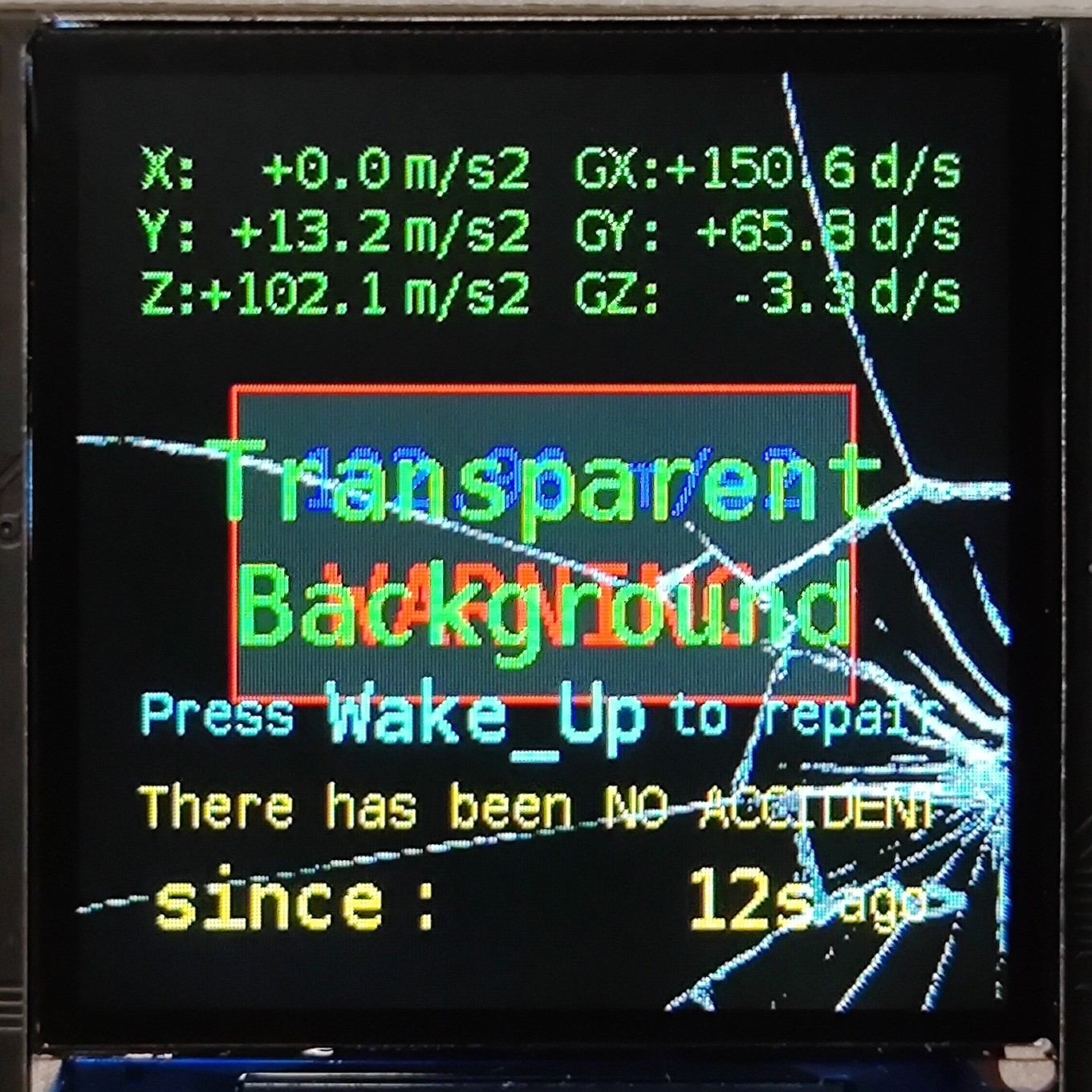 The original function uses the lcd_address_set function to specify the position of the character on the LCD, then takes the glyph defined in font.h and notates it as temp, and sends the colour of each pixel point to the LCD in turn, according to the glyph. As the program does not know what was originally displayed in that area, it can only fill the area outside the font with the background colour BACK_COLOR.

Since the chip does not support malloc operations at this time, the required cache area is hard-coded into the program code and will be automatically released after the character display process is executed:

Then we just need to choose to cover the original content with the background colour or to retain it with a transparent background:

2.2 Layer overlapping (not cover) when image is displayed

As with the display of text, when displaying a broken screen effect, we do not want the image to overwrite the original display, so similar to the idea of a transparent text box, we can achieve a layer overlay by reading the original display (a black background image is required for the overlay).

However unlike text, pictures have a much higher resolution than individual characters, and a full 240x240 bitmap would take up 172.8kB of RAM, while the CH32V307 chip only has a total of 64kB of SRAM space (although this can be expanded to 128kB by configuring the Flash memory as RAM), so reading the entire screen content and putting it into the cache at once is not possible.

The solution here is quite simple: since we can't process it all at once, we'll process it in batches, reading one line at a time and completing it in 240 passes, so that only 720 bytes of cache are needed.

After reading, the cache content buff and the image p to be displayed are superimposed pixel by pixel, taking care to convert the format between RGB565 (image) and RGB666 (cache) and to determine if there is any data overflow after the superimposition. Finally, write the processed line to the LCD frame buffer.

The image used in this step can be imitated by the font.h file. After the image is converted into a c array by tools such as Image2Lcd, it is stored in the image.h file and called in the main file using #include "image.h".

Chitu uses the PB14 pin of the chip to drive the backlight of the LCD module. This pin can be connected to the channel 2 inverting output (CH2N) of TIM1 to obtain the PWM signal. A half-baked PWM initialisation is provided in the original API, but there are a number of errors and omissions, so we will have to wait for a subsequent update. Here we can fix the PWM function ourselves.

First find the following code in the lcd_fsmc_init function:

Delete the RCC_APB2Periph_GPIOG from RCC_APB2PeriphClockCmd, as there is no GPIOG on the chip; then delete the PB14 initialization code here, as the FSMC does not need to use this pin.
Then modify the TIM1_PWMOut_Init function as instructed in the CH32V307 Tutorial [Episode 3] [Clock].

3 Overall process and other miscellaneous items

Firstly, the initialisation of the peripherals and devices is completed. Here, ±1000°/s and ±16g have been chosen as the range of the IMU.

TIM6 and TIM7 are used to set two timer interrupts, 1kHz and 30Hz respectively. 1kHz clock signal tick is used for sensor data acquisition and judgement, and is also responsible for timing (timing unit is ms), while 30Hz signal refresh_flag is used for LCD refresh. As the LCD refresh is relatively time consuming, if it is constantly refreshed it will crowd out the IMU sampling time, resulting in a large amount of missed data, so it is recommended to limit the LCD refresh rate or place the IMU sampling in the interrupt callback function. The timer can also be used as described in CH32V307 Tutorial [Episode 3] [Clock].

Above is the initialisation part in the program. The next part is the main loop.

First the six axes of IMU data are collected (the acquisition function here outputs the converted true value in float format) and the total acceleration and total angular velocity are calculated from the three axis components. As the processor does not support the sqrt function provided in math.h, the floating point number is directly converted to an integer by multiplying it by 100 and calculating the square root of the integer (calculating the square root of an integer is much faster than a floating point number).

The warning is then judged to be triggered or not based on the total acceleration. The warning_flag here is a flag bit to display the warning message when the display is refreshed, while the two timestamps time_stamp_trigger and time_stamp_record are to allow the warning data to be remained on screen for a period of time after the warning has been triggered so that it can be read.

After data acquisition and the determination of warning and broken screen thresholds are completed, the tick signal is cleared for the next trigger.

After receiving the display refresh signal refresh_flag, the code can display the corresponding content according to the warning_flag, crack_flag and other flag bits, including the real-time component and total amount of acceleration and angular velocity, warning flags, timing information, etc. This part is considered a UI design and it is recommended that you are free to play with it as much as possible.

When displaying the data, it should be noted that the compiler does not support direct formatting of decimals (i.e. formatting parameters such as %+6.1f or %5e are not supported), so the decimals need to be converted to an integer part + two integers in the decimal part for display. For example:

Then a screen-breaking simulator that can be used to scare kids has done : )